October 21, 2011
Hi everyone, sorry for not answering some of  your questions earlier, i have been busy working and practising sefshin.  I post this article because many people are emailing me and asking about this art and it's origin. Hope this article helps you to undersatand about it. I have taken it from www.sefshin.com. So it must be accurate.
You can also click here to view the website and see Grandmaster Mehdi Zand,s latest awards as well as grading events and it's related pictures. By the way i have also passed my test, i was nervous as so people came to watch, but passed it anyway with flying colors. Talk to you soon.


What is Sefshin
Sefshin is the name taken from the language of Serra, meaning the Secret Combat of Fire. Its creator is Supreme Grand Master Mehdi Zand, one of the world's most renowned and highly decorated martial artist. Using over 40 years of experience, his exceptional mastery of combat arts and a mysterious connection with his writing he has created an extraordinary martial art system.
Rare as it may be, Sefshin is a perfect synergy of powerful and solid Japanese Karate with the agility and fluid beauty of Chinese Kung-Fu. Even so, the basic element that inspired the creation of this martial art comes from the passages of his book called The Exordium.
The Exordium is Master Zand's account of creation, the struggle for immortality and the ongoing battle for supremacy within the universe. In this epic tale there are unknown antagonists with the power and strength of the gods, faster than light and flexibility beyond normal comprehension. Some fought with honour and dignity while others fought ferociously and without mercy, but each side capable of devastating their opponent with just one strike.
The art of Sefshin aims to duplicate, as far as is humanly possible the attributes of those mystical characters. It will push beyond the limits of the physique and past the barriers within the mind and develop the practitioner into a confident and formidable martial artist, difficult to overcome and practically indomitable.
Following the path of Sefshin leads to greatness of the self and as Master Zand would say, “When aligned with the stars, you become a celestial body. When you are a shadow of the stars in line with the constellations of past, present and future and conquer all possibility therein, you will become The Master of fire.”

Popular posts from this blog

SEFSHIN - THE SECRET COMBAT OF FIRE

Hi, Welcome to my BLOGG SEFSHIN - THE SECRET COMBAT OF FIRE Hi, Hi, Hi, my name is Christopher Morris and welcome to my blog for Sef Shin - The Secrete Combat of Fire. This is a new system of martial art which is currently being taught by the Supreme Grandmaster himself Mehdi Zand. And I can’t tell you how fortunate I am to be learning directly from the man who has recently been awarded International Martial Arts Hall of Fame - Grand Master Founder of the Year by the International Martial Arts Times Magazine. I think this is a great honour .   Here’s the articles so just click it for the details. Now here’s a little back ground about me J I am a person who loves martial arts and I have tried most of the systems   out there. From Shotokan (yeah everyone has done that one) to Wing Chun to Aikido, Kendo, Jujitsu and Kickboxing. I love keeping fit and find the best way to keep myself motivated is to train in the martial arts. I used to be a po
Read more 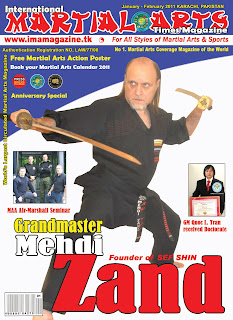 Hi guys it is me again and thank you for showing interest in my Blog. I just wanted to tell you that few weeks ago I passed the test for my orange belt.   I really love practicing this art and i can’t wait to become a black belt or become a Sefshin warrior- what an honour that Grandmaster Zand was present during my examination. Before I go I wanted to say that Grandmas ter Zand was on the cover of the martial art times magazine. And there is a 7 page interview inside, so I will add a link to the interview so you can read it for yourself. If anyone wants to discuss anything to do with Sefshin, just contact me and I’ll be happy to give any information. I have heard that he will be opening another class in a different location soon. Please click here to see the  Interviewer  visit www.mehdizand.org Thank you C. Morris
Read more